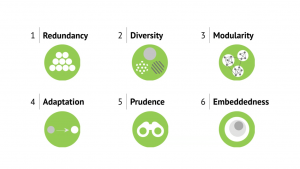 Thinking about change a lot? Or maybe about how to deal with change? My big question is how we can create lasting change.

Did you ever wonder how the human body is dealing with all the changes in its environment and what we can learn form this?

Our body can protects itself against every flu virus, even the brand new ones, the ones it has never seen before! How can our body defend itself, even for future and unknown viruses, and make sure we as a humans survive better than other elements in nature?

What can we learn from the body’s immune system and how could this relate to how we deal with change? And at a larger scale, how do organisations deal with change and what can we learn from how different parts in the body work together, in order to not only survive, but also to improve and learn. In the last 30 years, I have been dealing with large and complex change projects, sometimes affecting thousands of people, but the comparison with our immune system never crossed my mind. And besides just dealing with change, the real question in the end is: Will change last?

My thinking changed when reading Martin Reeves’ articles and watching his TED talk about “How to build a business that lasts 100 years“. I came to the conclusion that the 6 principles Reeves introduced, are extremely applicable in all we do concerning change in organisations. Going back over the larger change projects that were complex and presented a large impact to many people in the company, I quickly realised where some of the principles were not applied, but should have been. Especially on hindsight, when we consider how sustainable change is, and how important it is to be able to fully implement certain changes, to be able to harvest all the benefits. The key question again is: What makes changes resilient and enduring?

Reeves et al found that the same six principles underpinning the miracle of the human immune system, actually cropped up again and again, from redundancy through to embeddedness. They even looked at social systems such as the Roman Empire and the Catholic Church… When looking into business, they also found that these very same properties also characterised businesses that were resilient and long-lived, and the opposite, when these properties where not found, businesses tend to be short-lived.

The six principles are:

When it comes to change, redundancy means not getting dependent on one person, one team, one approach. Duplication creates buffers, continuity, sometimes also healthy competition and lots of creativity if organised wisely. Make sure change doen’t stop when some people stop. The flying wheel of change needs ongoing impulses.

Diversity in people, ideas, innovations, and endeavours. Diversity is also a great stimulance for creativity. Looks a bit overdone? If you’re after short-term efficiencies it does, but if you’re looking for a robust, endurable business, it’s not! The same applies to change, an approach based on diversity will include more people, attract and inspire more.  The benefits of being able to tap in to a great pool of diversity and creativity, especially when changes are needed, is a great asset for any organisation. Another good reason is that an explicit cultural shift and active managerial support may be needed to encourage people to risk failure and create new ideas. Because the absence of mistakes is a clear indication of missed opportunities (lack of experimentation) and ultimately of enterprise fragility. This is what made Fuji-film survive where Kodak collapsed.

The connection between people in an organisation and between business processes, is creating benefits through enhanced information flows, innovation, and agility. But they also tend to make the company vulnerable to severe adverse events (dependancies).  However, barriers between components of an organisation take away efficiencies and creates a silo mentality and culture, which would drive the organisation into a downward spiral anyway. Modularity allows for independent activities within the single modules, whilst the dependencies between the modules creates a dynamic process. This requires leaders and people to remain agile in their way of working together. Interdependency seems fragile but required. For change this implies a strong and disciplined approach within one phase of change design and implementation, and at the same time a loose but clear connection between the phases.

Expect surprise, but reduce uncertainty; Collect signals, detect patterns of change, imagine plausible outcomes, and take precautionary action. A key feature of complex change is that we cannot precisely predict its future states. However, we can collect signals, detect patterns of change, and imagine plausible outcomes—and take action to minimise undesirable ones. In business systems few things are harder to predict than the progress and impact of new technologies. Here as well measuring the progress change and feelings of the people involved is extremely valuable.

Foster trust, sharing and exchange; Act in ways that benefit other participants in the overall system, and establish mechanisms that ensure reciprocity. Individual interests often conflict, and when individuals pursue their own selfish interests, the system overall becomes weaker, and everyone suffers. Individuals lack incentives to act in ways that benefit the overall system unless they benefit in immediate ways themselves. Trust and the enforcement of reciprocity combine to provide a mechanism for organisations to overcome this quandary.

This site uses Akismet to reduce spam. Learn how your comment data is processed.